The self-taught, sought-after stylist and designer of LOGO by Lori Goldstein, a collection sold via home shopping network QVC, has had, not one, but two fashion careers. Here Goldstein shares how a fine balance of restlessness and hard work led her from the American Midwest to the top of the industry. 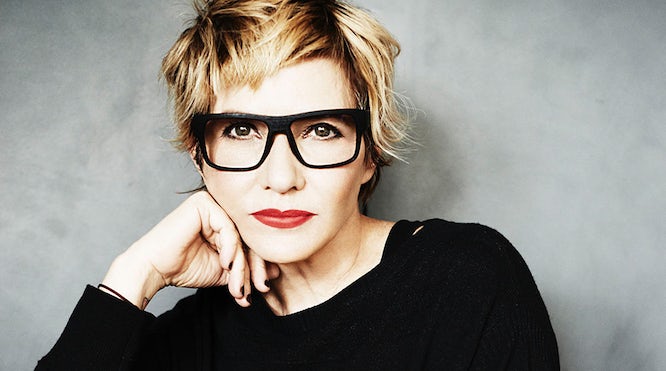 NEW YORK, United States — Just two months before the world would change irrevocably, July 2001 was a glorious summer in Paris. The couture shows had just ended and Lori Goldstein, by then already one of the most sought-after stylists in the world, had just finished working on a shoot for Vogue Italia with her friend Steven Meisel.  The location was an ancient, abandonned school outside of Paris; the cast included the aristocratic, veteran model-actress Marisa Berenson. “Many elements have to be aligned: a client who trusts you and lets you do your job, the right make-up, the right location,” says Goldstein. “It all came together that day. It was incredible.”

I knew that I was leaving Ohio and that I loved clothing. That was all I needed.

It was after that shoot that Goldstein had an epiphany. “‘If I were to stop today, I would have already done more than I could have ever imagined,’” she recalls having thought to herself. “To be able to work with the most talented people in the world, people that think like you, push you, with whom you get to do things that you could never even dream of doing — that’s what I had always been looking for.” Besides Meisel, Goldstein has worked closely with Annie Leibovitz and Mario Testino, who was also briefly a roommate. She has styled iconic magazine covers for Vanity Fair and W and a music video for Madonna, as well as advertising campaigns for Gap and Versace, helping to create some of fashion’s most era-defining imagery.

In fact, one of the Versace campaigns she styled — Fall 2001, featuring Amber Valetta and Georgina Grenville as pampered, grown-up women, lethally bored and extravagantly coiffed, in the baroque setting of their palatial Los Angeles homes — became such a classic, it got its own gallery show. While the Versace shoot has Goldstein’s aesthetic stamped all over it, more than anything, the rock-like jewels on Valetta and Greenville were a tell-tale sign of her involvement. Alongside her penchant for mixing patterns, shapes and colours (her much-quoted mantra is ‘Everything Goes with Anything’), Goldstein loves to accessorise a look, especially with big, shiny baubles.

That summer day in Paris, thirteen years ago, Goldstein says, “I felt I had achieved what I set out to do. When I was young, I had no idea how I was going to get to where I was going. But I knew there was something inside of me that I had to follow.”

Goldstein grew up in Cincinnati, Ohio, the restless daughter of an entrepreneur and a housewife, and was aware early-on of her affinity for fashion. “I always loved clothes, the colours and the brightness and mixing patterns, shopping and getting dressed up — I can’t remember a time of my life when I didn’t use clothing as an expression of who I am.” Normality, on the other hand, frightened her. “I always was afraid of the mundane, I knew that was not for me.” But if the young Goldstein had no clear plan, she had no doubt about two things: “I knew that I was leaving Ohio and that I loved clothing. That was all I needed.”

After following a boyfriend to Los Angeles when she was 17, Goldstein eventually went to work for Fred Segal. The pioneering retailer and owner of the eponymous store became Goldstein’s first mentor. “I really respected him and was a little fearful of him. He saw something in me.” Indeed, Goldstein had worked for Segal for all of three months when he asked her to join him on a buying trip to New York. Goldstein remembers driving into the city from the airport. “The second I saw that city, the second I saw that skyline, all that turbulence inside of me settled. Immediately, that unrest that I had felt for 20 years just melted away. I knew ‘I’m home, I am moving here.’” Indeed, she moved to New York the next year. It was the late 1970s and Goldstein was aged 21.

While she had found her natural habitat, it took Goldstein a while to find her voice and function in the fashion industry. She worked several jobs — in sales and buying — before a friend suggested she become a stylist. The thought was daunting, but Goldstein put together a portfolio and soon was working for Macy’s, pulling clothes for catalogues and advertising campaigns. She had found her profession. “I went from eating dinner that friends graciously made for me to making $350 a day.” Accepting challenges that can, at first, seem scary is one of the leitmotifs of Goldstein’s career. “To this date, every time I am about to do something new, I have doubts about whether I can or should do it. But in the end I always say ‘Yes.’ ‘Yes’ just comes out of my mouth, which is a good thing. I think it’s really good to have that fear.”

So when, in the mid-1980s, a friend called and asked if she would style her for a shoot by Annie Leibovitz, Goldstein was fearful, but said yes. It was the start of a fifteen-year collaboration with Leibovitz — working on shoots for Vanity Fair as well as campaigns for the likes of American Express — that cemented Goldstein’s name in the industry. “I learnt so much about photography, about clothing not being the most important aspect of a photograph, about depth of field and how clothing can fill up a photograph and become important. It was an education.”

Another big turning point in Goldstein’s career was becoming one of the first stylists to ever be represented by an agent. “No [agency] wanted to take stylists, but I didn’t want to have to negotiate my own rates or have to talk money with my clients.” Goldstein persevered and convinced Art & Commerce, which had only just been founded, to take her on. “I think it elevated the profession as a whole.”

Soon after, she was asked to do her first job with Steven Meisel for Italian Vogue. “I was scared to death,” Goldstein recalls. But her insecurities were unfounded: an ensuing collaboration with Meisel, which lasted for many years, generated innumerable editorials that are now considered iconic and are oft-cited as inspirational references by a generation of designers and stylists.

Goldstein sees clothes as a means of self-exploration and self-expression. As such, the only way to approach fashion is by being fearless. “For me styling means creating something special from head-to-toe, so it becomes more than just clothes, it becomes a look. It’s making stuff up and asking questions like ‘Who would that woman be?’ and ‘How would the dress look the most amazing?’”

“Being a fashion stylist is really hard work,” says Goldstein. “I am an overachiever, so nothing remains uncombed. If you want a dress it will be anywhere from a Loehmann’s to getting it from 1stdibs to combing virtually every store on the planet. I don’t care where it comes from as long as I find it.”

Today, Goldstein is equally known for her partnership with the home shopping television network QVC, which she describes as a lucky opportunity that came about just as she was growing a little bored with styling. In five years, LOGO by Lori Goldstein, the line she began designing for QVC in 2009, has become the television network’s fastest-growing fashion brand, spawning multiple extensions and expected to generate more than $70 million in sales this year.

“I really have changed careers. In the early days, I was rarely in my office, I was always on a shoot, in a studio or on location, or out prepping a job. And I loved it that way, because I was afraid of anything that was normal or involved having to be somewhere, so I ran from that. But now I love the things I was most fearful of: having a real job and coming to an office everyday.”

She says, “If you want to be in fashion you have to absolutely love what you do, because it’s more than a job — it’s your life. This is a very intense and hard business. But don’t worry, trust life. Anything you want, you are capable of getting, it just takes a combination of effort and grace.”