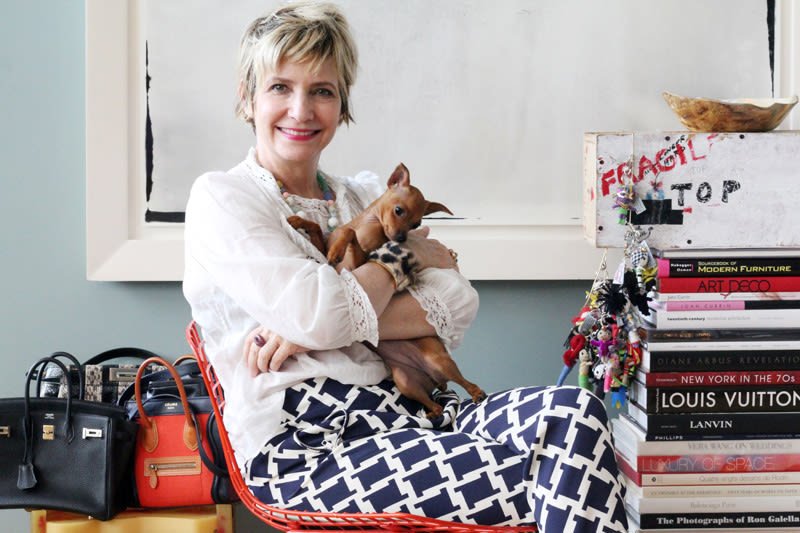 “Everything for me is a visual delight, what makes me happy, and that’s what my bathroom is an extension of. I designed the whole room—I went to the stone yard and bought the agate, and it was just as fun as going to Barneys! It’s not like I’m a prissy, primp-y girl, but I love my baths. I have a major tub. I’m obsessed with my bath and bath oils, and my Dr. Bronner’s lavender soap that I’ve been using since the hippie days. Also I hate when my hair is too clean, so I love soaking in my tub with all the oils in my hair, making it that great texture that you can’t really get just by putting product in it. I go through different oil phases—I’m obsessed with Rodin, which we all are—and also I just love finding new ones, but very natural. I’ve always been that way, but especially when you’re soaking in a tub, you want to make sure it’s good for you. I’ve used Dr. Hauschka always—I just refilled the Sage Bath. And I just found these two great ones: Lothantique, and Susanne Kaufmann. I go to different places to find them…there’s this hippie place on Eighth Avenue called Arcadia, and I go to Aedes [De Venustas]. And I love the oils for fragrance—I feel naked if I don’t have my oil on.

I have to get comfortable when I get home, so the bra comes off, the hair clips goes in…I’m obsessed with my hair clips—there were like five years of my life where I never went anywhere without a hair clip. It became a joke… Orlando [Pita] was like, ‘You have to stop.’ He’s been cutting my hair for over twenty years; we’ve been best friends forever. My hair’s been a million different styles but it always has to be kind of punk-y; I hate when it looks too normal. I like things a little off; I like being an individual and I like playing. There’s a story I did in September W where the girl has this half dyed hair with green and pink and I just love it! I would totally do rainbow hair. But anyway I don’t think I’ll ever have long hair again—short hair suits me and it’s so easy breezy. Kérastase products for colored hair are awesome; when I’m on the road and I just use whatever the hotel has, it’s so not the same. 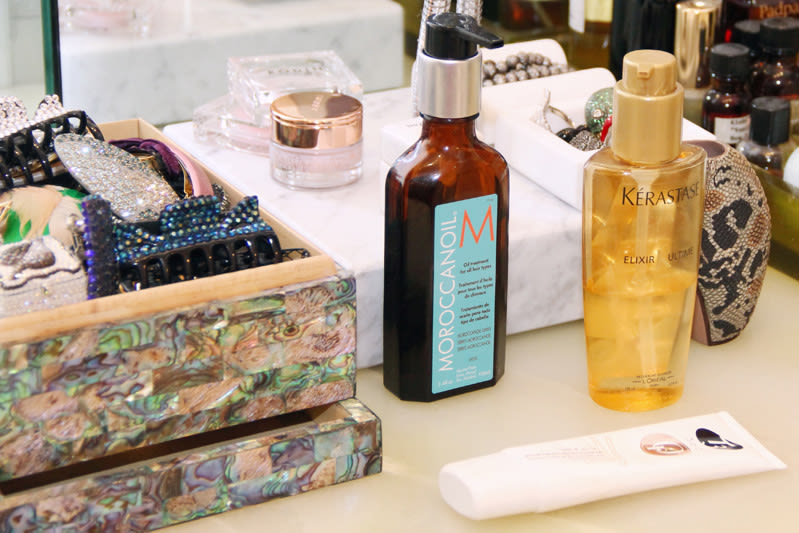 I love a product…in my categories. What’s cool is I have my categories, it’s not like this, that, and the other. Oils for the bath, nail polishes—I love Deborah Lippmann, she’s my friend—oils for the body, and lipstick. The red lip is kind of this classic thing I’ve lived in since the eighties. I guess I hide behind it, and really, the older I get, you just put that lipstick on and that’s the focus. I’m really into the NARS pencils, the Dragon Girl…they’re easy, I just carry them with me, and you put that on with a sunglass or your glasses and it’s kind of like a mask. The pink I’m wearing now is Funny Face by NARS. It’s kind of that nice in-between color that’s not too bright. I love my By Terry’s too, and the By Terry Or de Rose is a great lip balm because it has some iridescence. Homeoplasmine is also great for prepping lipstick; it kind of gives the lips this plumpness. 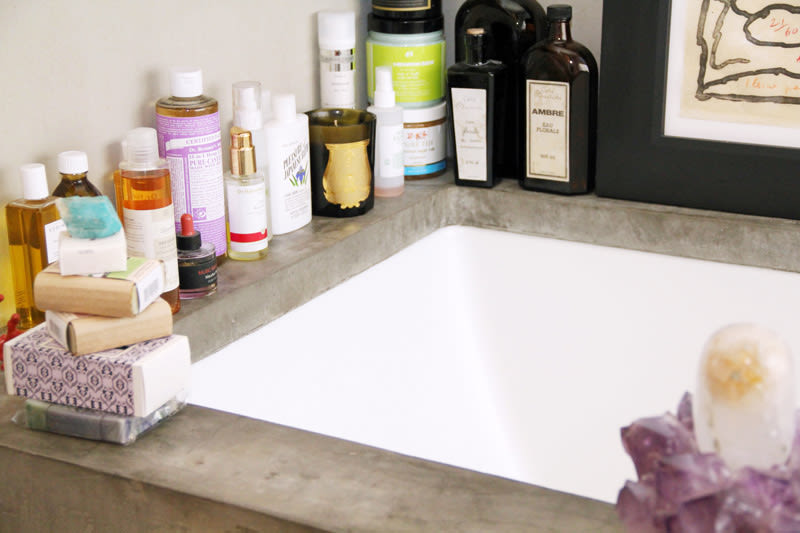 I’ve had oily skin my whole life—which is a good thing now that I’m a certain age—and in the old days, it was all about getting it squeaky clean. I’ve retrained myself to appreciate those natural oils and moisturizing. Skin care is pretty much Joëlle Ciocco. She’s amazing—if you’re in Paris you have to go. We can barely communicate because I don’t speak French and she doesn’t speak English, but it’s beyond and those products are beyond. It’s this regime I’ve been on for years and years. Barneys carried the products for a minute but then they stopped, and luckily I found Isabelle Bellis in New York. I love Colbert M.D. by Dr. David Colbert, and his products are great too, I use them in between—but I can’t get off the Joëlle. In fact I was just in Paris and she just turned me on to these ampules of Magnesium that you buy at the pharmacy there. I don’t know what it does but I put one on every morning and my skin feels amazing. And I used to only do the cleansing and moisturizing but she just put me on a whole new set of products—I’m not even telling you how much it all cost…you know, I could have gotten an Hermès bag. [Laughs] The drag is, there’s no SPF in her products, so she tells me to use La Roche-Posay Anthelios. But Pat Wexler also makes a great moisturizer with SPF that I’ll sometimes use.

Getting older, it’s a trip. Especially because in our minds, we’re still that ten-year-old kid, that twenty-year-old—we are who we are. Surgery and cosmetic procedures are such an individual decision, and I would never judge anybody for doing anything. I mean I grew up with a Jewish mother who was always, ‘Look at me now, should I do it?!’ And I thought, ‘Blech, I’ll never do anything.’ You hear so many young people saying, ‘No way, never,’ about something, and I’m like, ‘Honey, just wait.’ I don’t know if I’ll ever have a facelift or cutting—we all have what we can and can’t do—and I don’t think they’ve perfected surgery…I see so many scary faces. But there are so many great new products available, and I want to be honest with women.

I remember the first time I did something, I was around forty-five and I got fat injections, and I have to say it was kind of amazing. That’s all about under your cheeks, in your jaw line. But, that said, you had to take antibiotics, and you had to go through the process of taking your fat out of other places—it was just too much. So now I get Botox and also a newer filler for the jaw line. But it’s really all about who you go to, and I love Dr. Colbert. It’s an art, just like anything else. Unfortunately I think there are doctors who ruin faces. And if you go to too many doctors, that’s bad too, because everyone wants to leave their mark. Like, if you go to a hairdresser and they say, ‘Oh, the last one cut your hair wrong, let me fix it,’ and then by the third person you’re bald! [Laughs] It’s really about subtlety, and I go twice a year. But it is intense—I don’t love knowing that stuff is in my body; I’m half hippie so I’m not thrilled—but you do see the difference, and it’s worth it to me to be able to look in the mirror and not freak out and think, ‘I need a facelift.’ You have to follow your own gut and heart, and I’m grateful that these things exist, and that I know how far to go.”

—as told to ITG